Links of the Week, Social Networks

Hopefully everyone is actually getting as much work done as we are now that summer has arrived. It amazes me that people don’t realize that tech people at colleges and universities get all their work done during the summer when we don’t have the daily interruptions with people’s perceived emergencies. If your curious what other College Summer Web Projects are check out the Summer Project discussion over on University Web Developer that I started a while back.

I’ve started playing a little bit with both FriendFeed and Plurk this week so if it’s something you’re thinking about or already on come friend me. If your wondering what the heck Plurk is Wayne Smallman over at Blah, Blah Technology has written a few pieces about it and his post, What is Plurk?, is a rather helpful read.

Also if you missed my Bronto webcast the other week about Email Marketing the podcast along with a case study is posted in Bronto’s Success Stories. As mentioned before, I’ll also be presenting on Email Marketing for Higher Education at the eduWEB conference in late July.

Now to the lucky seven links of the week, and one to grow on!

Kyle James - who has written 229 posts on .eduGuru 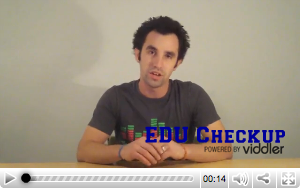