Since my last update a few months ago about Café New Paltz, our online Ning community for fall 2009 accepted students, we’ve completed this year’s traditional recruitment cycle. We’re extremely pleased with the results and continued growth of this community.

The community continued to grow from February through the mid-April, as our undergraduate admissions office sent email invitations every couple of weeks to the latest batch of students accepted to our university.

At the end of April we had a slight mishap that we ended up turning into a great opportunity. During one of our routine exports from Banner, our student record system where we pull email addresses for the latest batch of accepted students, we accidentally included “all” accepted students, not just first-year students. This resulted in inviting 400 recently accepted transfer students. A large majority ended up accepting our invitation and started forming their own groups organically. While we initially panicked, we realized this was a good thing. They have many of the same concerns as first year students - meeting new people, starting classes at a brand new campus, figuring out the maze of offices to contact for various questions/concerns, etc. The only major difference is that we don’t provide on-campus housing to transfer students — and this turned into an excellent opportunity they seized by starting groups related to finding off-campus housing and roommates.

We continued to provide video updates by our two baristas throughout the semester. According to Ning’s usage stats, their viewership was not significantly high enough for us to want to put a great deal of resources (time, human and money) into this effort in the future, should we do this again.

My love letter to Ning

Ning makes it very hard for us to measure our success in a quantitative way. We have tied in our Google Analytics account for basic Web stats. Within Ning, I’ve been able to grab oodles of qualitative tid-bits I’ve been able to grab from various forum posts, live chats and direct messages, but I want more. Here is my kind request to Ning:

It would mean the world to me if you would give us access to member usage data. My wish list includes the ability to track the most active member(s), the least active member(s), percentages showing how often people log in (x daily, x weekly, x monthly), and how many times they’ve logged in overall.

We love you dearly and are grateful for all you’ve helped us accomplish, but we need more.

With much love and respect,
Rachel & her colleagues

May 1st was the national deposit deadline, which we also use. I was interested to see how the membership data correlated with the statistics of those students who paid their pre-enrollment deposit (PED).

Since Ning does not connect directly with our student records system, I was still determined to find a way to get some data out of the email address export I can get from Ning. I worked with my colleague in undergraduate admissions and our Web Programmer, and developed a list of areas I wanted to be able to report on by matching email addresses exported from Ning with email addresses in Banner. Here’s what we were able to get from the list of 690 members we exported from Ning on May 4:

70 % of the members of our Ning community who paid their PED were from our highest admission selectivity group. The yield of our highest selectivity group took a significant jump from 30% last year to 37% this year. The Ning community was one our largest efforts to increase the yield of this highly selective group and based on the participation in the Ning and our significant increase in yield for this group we would consider it a great success.

I was also able to get three separate e-mail lists: first-year students (742) and transfer students (526) who paid their PED but did not become a member of Café New Paltz, so we can send them a special re-invite; and those accepted students who joined Café New Paltz but opted not to pay their PED or attend SUNY New Paltz (283). We will use that final list to purge members from the Café. Unfortunately, this is another limitation of Ning - we have to do this manually, one-by-one. To give these numbers a bit of context, we have roughly 15,000 freshmen applications, accept around 5,000, and our first year class for fall 2009 will be around 1,100 students. We received about 3,200 transfer applications, accepted about 1,100 and just over 600 will be joining us this fall.

We started a forum in mid-March asking the members to tell us if they wanted Café New Paltz to continue to be available, and we received about 30 responses strongly encouraging us to keep it open at least through summer orientation, and some requested to continue through their entire first year. Undergraduate Admissions is turning over their role to the Student Affairs division, whose efforts will be largely led by their Coordinator of First Year Programs. Café New Paltz will continue to exist at least through the end of this calendar year at this point. We’re going to re-evaluate its use and effectiveness in October/November to determine whether it is worth continuing for the spring 2010 semester.

Our two current baristas are moving on — one graduated from graduate school with his MBA, and the other will continue his active membership in many student organizations and being a student ambassador. He’s also going to be a blogger for us next year on https://npbloggers.newpaltz.edu. The Coordinator of First Year Programs will take the lead on the occasion that responses will be helpful from staff at the college, and she will be joined by a few other students later in the summer that will fill in the barista role. One student is an international student from China who will cater specifically to international students in the Café. The other two are this summer’s senior orientation leaders that all first-year students will meet throughout the summer.

Will we do this again?

Good question! Café New Paltz has exceeded our wildest expectations. We have no regrets and could absolutely forsee doing this again. However, we won’t decide until October/November. January 1, 2010 is too far ahead to plan in this social media space, in my opinion. Who knows what the next best thing will be then…

Rachel Reuben - who has written 33 posts on .eduGuru

Rachel Reuben is the Director of Web Communication and Strategic Projects at the State University of New York at New Paltz, where she has worked in various Web communication, public relation, and marketing capacities over the last 11 years. Her areas of interest include eRecruiting, the use of social media in higher education for marketing and communication, as well as information architecture and user experience. Read her complete bio. 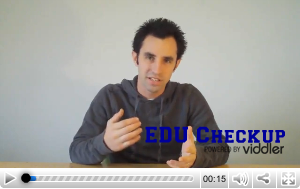