Finally yesterday my luggage arrived at GSP Airport four days after I last dropped it off in Philly.  It was a short lived time of rejoicing.  It’s been a challenging weekend as I visited my family and going through my father’s will and discussing moving issues and passing on his car; he won’t need it as he can never drive again.  Just a quick update, my father has been diagnosed with brain cancer and it’s a form that is not curable.  The good news is that we are looking at years of time with him instead of months.  He’ll be starting radiation treatment in a few weeks and I’m sure that will be challenging for our family.  As he tells me and I couldn’t agree more, “It will be alright”.  Everyone, thank you for the prayers and offers of assistance. So let’s get back on reflecting on this conference and my takeaway points three, four, and five. END_OF_DOCUMENT_TOKEN_TO_BE_REPLACED 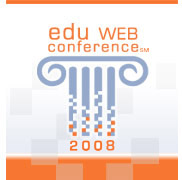 Now that my presentation is through here are some goodies for anyone that missed the presentation along with some additional data.  This presentation was definitely a good learning experience for myself as it’s really the first time I’ve given a presentation in the hour long format.    It’s a tough balance not getting too technical while also keeping the marketing message in mind.  Next time I’ll know to slow down a little bit and more elaborate on some points.  If you attended I’d love to hear any feedback positive or negative.  I can’t learn from what I could do better if I don’t know.  Feel free to drop a comment or contact me directly.

END_OF_DOCUMENT_TOKEN_TO_BE_REPLACED

Do you Data Mine your Blogs?

As I introduced in my previous post this week, Information about Wofford’s Blogs and Alumni Bloggers,  Wofford has a lot going on in our Network of blogs.  Now that it’s the summer time and content is a little slow for most colleges there is the dilemma of what to feature on the main site homepage?  Well maybe you don’t have a spotlight type feature like Wofford does on its homepage, but none the less do you data mine your blogs? END_OF_DOCUMENT_TOKEN_TO_BE_REPLACED

This is just a quick reminder to make sure that you sign up for the Email Marketing Webcast that I’m doing tomorrow afternoon with DJ Waldow from Bronto. It promises to be an insightful look into an element of Wofford’s marketing campaign that has become a very important piece of the puzzle in a short time, the last year and half.

END_OF_DOCUMENT_TOKEN_TO_BE_REPLACED 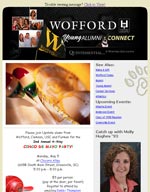 Just a quick heads up to inform people about an upcoming webcast that I’m doing next week with the awesome people at Bronto. Sign-up for the webcast next Tuesday, May 20th at 2pm EDT.

END_OF_DOCUMENT_TOKEN_TO_BE_REPLACED

Wofford College’s president, Dr. Benjamin Dunlap, was turned into an Internet sensation a few weeks ago when a video of his presentation at the TED conference from back in March 2007 was posted online on January 24th.  You can learn more about Dr. Dunlap on Wikipedia or Wofford’s President page.  Here is the original Wofford press release of the speech.

END_OF_DOCUMENT_TOKEN_TO_BE_REPLACED

Here’s the weekly wrap-up of worthly tech news and a few extra tidbits. Lots of great news and articles this week! By far the biggest news of the week just happened this morning with Microsoft agreeing to buy Yahoo (links below). I’ve been telling people for the last month now that Yahoo was the perfect stock to pickup because it’s fallen so far… I just looked and Yahoo’s stock is up 44% today.  Guess I just blew that lottery pick! END_OF_DOCUMENT_TOKEN_TO_BE_REPLACED

Does your institution e-mail market? We do!

In the last year we have put a lot of time and effort into creating a solid email marketing campaign. What has been so unbelievable about the campaign is the growing support that we have been receiving from various departments around campus. I’ll save it for another post to really look at the various departments and how they are using our mailshot system to communicate with constituents, but wanted to share an excellent example of how it can drive traffic to your website. For Wofford’s e-mail marketing we use Bronto and to reduce confusion on campus refer to it as mailshot instead of list distribution or blast email or any of the other names out there.