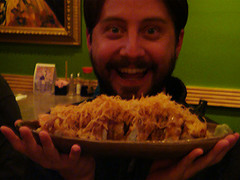 Sorry, it’s day 3 and I’m starting to drag a little bit.  And I didn’t even drink at the Brew Co. last night.  I did, however lose at pool.  Scratch on the eight ball.  How humiliating is that?  I did get some of the new pictures posted to Flickr, and I’ll have some Flip videos up once I get home (wifi here not so robust for video uploads).  We also broke the eduWeb sushi record and got what I counted to be 30 people into the place.  That poor waitress.  It was pretty good.  The Crunchy Lobster roll I had was the biggest sushi roll I’ve ever eaten.

Starting out the morning in APS7, something on identity management (IM).  Yes, I could have read the description, but that would require me to get out The Book of descriptions.  Identity management is not an end to itself, and is a collection of processes, policies, and programs (what is with all the alliteration of the letter P around here).  You must remain flexible, and know when to establish and describe an identity.  I’m not totally lost, but I’m not totally following just yet.

Circa 1998, the approach to IM was the idea of one giant database.  Now, we have a lot more personal information needs, as well as unfunded mandates (need iTunes U support, other systems that require information not already indexed, etc).  There’s also the problem that now we have to consider keeping accounts “forever.”  To work on getting to a manageable solution, start with directory services (a la Active Directory/LDAP), build harvesters to aggregate information, add on CAS/Shibboleth.  Now holy crap, we see a map of how SUNY is doing it, and it looks crazy involved.  They are planning a simpler setup, but it still looks pretty complex technologically speaking.  This is way more TPR minded in my opinion.  Lots of acronyms flying around.  In fact, it’s getting more complex the further we go.  Unfortunately, none of this stuff is my responsibility, nor do I have any input on the matter, so really I’m not getting too much out of this.

With better IM policies and management, you can simplify data freshness (keeping names sync’d in different systems when someone gets married), enforce global password policies, make account management more “self service” oriented.  Facebook is a prime example of how much information is available, but permissioned in different ways, not to mention how it’s changing people’s expectations of directory related information.  He’s also tying this in to single sign on.  I want to make a point here: single sign on, to me, is about one thing - convenience.  As far as security goes, it concerns me, only because we’re coming back around to putting things in a position where compromising one password compromises everything that identity can access.  I’m not totally sure that that practice is the best thing for security yet.  I’m all for IM, I just haven’t heard what seems yet like a nice balance between IM and security.  Something OpenID-ish maybe.

Update 10:01AM ~ Kyle, da Guru, is on deck in APS8 talking about Google Analytics.  He’s a big nut on analytics data.  Also just a big nut.  He’s threatened us with 65 slides.  I threatened him with decapitation.

Consider how you are making decisions.  Do you do it based on what makes sense, or what your boss tells you is needed.  Keep in mind key performance indicators: sources, content, success, and users.  Trying to type fast here.  Determine what is important: student traffic, RSS subscriptions, video views, etc?  Decide what you need to measure to determine success.  Some misunderstood terms: pageviews, average time on site (can’t measure the last page they were on), bounce rate/exit rate (a bounce is always an exit, an exit is not always a bounce), traffic types.  Plug: edurank.nucloud.com for ranking colleges.

Google Analytics supports up to 100 profiles now, good for www plus subdomains.  Also segment on and off campus traffic.  Apply a default filter to everything like filtering everything to always be lowercase.  This helps standardize data (unless you have case sensitive URIs).

Update 10:26AM ~Tagging and tracking.  https://doteduguru.com/hew/urlbuilder. You can force some tracking info into links using onClick events.  Same for videos and other non-HTML media.  Site Search is a great way to get keyword information on what people are looking for.  Set up 404 error reports to analyze links in that need to be contacted to change links.  Put dollar values on different actions: campus visits, information requests, etc to help you set up and track goals in a meaningful way.  Tracking email, alumni looked at blogs, which were targeted at prospective students.

Update 11:02AM ~ Headed in to the SEO session now.  Amazing people with my uber extension cord.  First important note, most SEO optimization companies are total snake oil, which is completely true.  SEO isn’t something that you do and then walk away from it.  It has to be an ongoing practice that involves training in things like good writing, etc.

SEO can be good to override undesirable results that might be coming up in search engines that which “true”, are far less flattering images of the university.  Might not always be best to try to fight certain groups for Pay-per-click spots, as universities like the University of Phoenix, as an online institution, puts a lot of money behind it.  Not that it’s always a bad idea, you just have to target the words right and pick good ones that you know you will rank well on.  “Degree” or “Program” related terms have more than double over the past year, many nearing almost $20 per click.  At the same time it’s becoming less effective as well.  Bid at the end of the day or month, and grab more obscure phrases.  They’ll show up less, but will actually be better targetted and *should* result in more conversions.

Update 11:25AM ~.edu sites naturally have an advantage over others in things like PageRank and other scoring systems because our pages are naturally more trusted and higher quality (relatively speaking, of course).  Try to make sure you always include www or another subdomain in the paths, include trailing slasheds, avoid usage of things like index.html.  Keep in mind that most search engines treat things like example.com and www.example.com as two different sites.  Try to use nouns as links instead of verbs.

Page title is the most important tool for improving page ratings.  Keep it under 70 characters, and try to use key words and key phrases.  It also serves as bookmark names, and tells people where they are.  Also try to keep your site as flat as possible, avoid Flash, SilverLight, iframes, JavaScript navigation, etc.

50% of searches use 2 or 3 word combinations, so pages should be built with key phrases in mind.  And don’t be afraid to customize navigation to better reflect how people search for things.

Okay, packing in.  Lunch time, then poster sessions, then special interest groups.  Be sure to drop in on the lightning round table at the SIGs to hear me talk Twitter for five minutes.

Update 1:26PM ~ HighEdWebwill be in Milwaukee, WI, October 4-7, for the record.  Post lunch at FounderFord’s keynote.  He’s one of the brains behind the increasingly popular Ning.com (for customized social networks) as the product manager and is talking about social networking.  Ning gives people the power to create social networks about anything that they want.  It’s the largest social network you’ve never heard of.  They sacrifice their own brand exposure to help you reinforce your network.  Lots of examples of groups from every corner of things you can imagine, including the HighEdWeb group.

Classroom 2.0 is an example of a site that was developed to talk about Web 2.0 stuff in education, and also led to the development of education.ning.com.  Neat idea: set up a network in a foreign language, and even invite people from that country to join to reinforce a language class.

The old way of information access was learning about through the information, now it’s about learning potential through the community.  It’s like a calculator in that it levels the playing field for basic math.  It’s not that you don’t know it or can’t use it, it’s about using a tool to streamline skills.  “Big is the New Small.”

“Ambient Awareness.”  Coined by Clive Thompson.  The idea that small nuggets of information are unimportant, but when viewed as a collective of information, you see a cloud of stories and portraits.  It’s like passive water cooler chat that you pick up through Facebook statuses, Twitter, etc.

Update 1:39PM ~ Increasing control of student behavior on social networking sites.  Do you think that’s right?  Need to consider the smart way to address these problems.

Sneak peak of the new iPhone interface for Ning, which will also be at home in WebKit with Google Android.  Bill Joy: “Most of the smart people in the world don’t work for your company.”  Using this idea to try and develop a system based on OpenSocial to let third parties contribute applications back to Ning.

Update 2:42PM ~ Chris Mills of Opera is presenting a session on where web standards are going.  Holy crap he’s English!  And a drummer.  He also does some kind of barely important web stuff by comparison.

Standards are easy, implementing them is hard.  The W3C stepped in to try and smooth things out.  Opera is releasing the MAMA project soon that will be a search engine for technical data about pages, rather than the content on them. Page validation up to 4.13% from .71% in 2001.  Only half of pages showing a W3C validation badge validate.

Who doesn’t use standards: corporate developers, existing developers who don’t care, educators, and hobbyists.  Vendor lock in is a serious problem that is caused if a bad project that costs a lot of money can’t easily be replaced for the sake of compliancy.  Existing developers will take short cuts when not paid to take the extra care, so why should they put forth the effort?  MS developers love Silverlight because it allows them to ignore standards and hide bad code made by .Net. Universities don’t teach standards.

What can be done?  Education is the main issue.  You have to teach best practices.  And training materials need to be improved.  Lot’s of online tutorials are old or out of date, but people still find them and learn from them.  This was the motivation behind https://www.opera.com/wsc.  They are targeting the specific problem groups.  “Accessibility is good for a company’s moral image.”  Companies already love standards, look at their messages, language, stationary, letterhead, branding, etc.

Poster sessions are next, which I won’t be blogging.  Following that, we have special interest groups, where I’m doing a lightning round, so I probably won’t be on for that, either.  So, if you don’t hear from me again today, Look for the last day tomorrow!