Have you ever heard the phrase how you can have too much of a good thing? That’s sort of how I feel about Facebook’s move to add Community Pages. I understand it. It’s not that it doesn’t make some sense. But it feels very much like a case of execution before consideration. They thought it was a good idea, so they just ran with it. I’m a huge proponent of the idea that companies don’t own their brand, the consumers do. Brand is ephemeral. It’s an idea, a perception, an attitude, an emotion - all had by your customers. You can try to shape it, to mold it, but ultimately the only thing you actually own are your trademarks.

But, in terms of user generated content, that doesn’t mean you give away the keys to the kingdom. People are still adapting to their role in the social brand development space. They need a garden hose, yet Facebook is handing over a fire hose. Hannah Feldman of Clark College contacted us about this issue recently via our Ask the Gurus section out of a concern for this new change in Facebook’s system, and I thought it was more than important enough to open up the discourse to everyone. The issue she noted was that some folks had listed “Clark College” as an interest (or maybe as their employer, or college they attended - it can get sucked in from anywhere), and as a result, Facebook made a community page for them (actually, it appears that they have made several). Like many of us, they have put a lot of time and effort into setting up their own page for people to become fans of like.When you are dealing with communities, especially if it is a small one, it is enormously important to cultivate them and concentrate them. When people have to hunt out and think about which page to like, it ultimately hurts engagement and people miss out on the real dance (remember students joining the fake Class ofpages last year?). 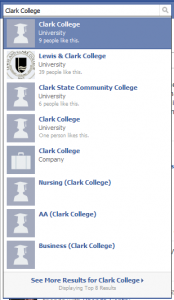 One of the most immediate effects is that now, a quick search for Clark College doesn’t even turn up their main page in the top eight. That’s some fine SEO work there, Lou. I mean really, Facebook, you value an algorithmically generated page with 9 likers (?) over their established organizational page with almost 900 fans (screw it, fans is easier to say, and so I’m going to)? At least Lewis & Clark can sleep well tonight. Actually, most big players have nothing to fear in this instance, for whatever mysterious reason. It’s all the smaller players that really need the exposure the most that seem to have been overlooked.

And sure, maybe that could be overlooked, except for one thing: the community pages are worthless. Let’s just call a duck a duck here. Big pages are just scraping and displaying information from Wikipedia, and small pages just do a regex match for people’s status updates and aggregates the hits. That has an obvious effect: the community page for Clark College is showing people mentioning Lewis & Clark College. And you know how I mentioned that big pages seem to fair the quick results storm okay? Don’t worry, Facebook has reserved the right to co-op your pages and turn over it’s development to the community, and there’s pretty much no information on what rules or standards apply to that policy, besides “If it becomes very popular (attracting thousands of fans)…”. This is what I meant when I said too much of a good thing. You can’t just open the flood gates and start creating pages algorithmically from the interests, et cetera that people are putting in. Something like this must be balanced, tempered. At least for now, fans of Clark College are now forced to do a hard search for their school if they want to actually engage with them.

What’s to be done? At the moment, I can find very little, besides getting loud and angry. There appears to be no “flag this page as erroneous” feature, or anything like it. Write Facebook and explain your displeasure, and see if we can motivate the development of better checks and balances. I wouldn’t suggest signing up to be notified when they are ready for help building the pages yet, one because there’s no information on when that will be or what it will enable, and two because I’d hate to do anything that would appear to be supporting this process before there’s a clear path to how it’ll help us fix it. Social networking is a dance. You throw a party, help people get out on the floor, and get out of the damn way. People have a good time, they talk about that time you threw an awesome party, and you take credit for that couple that met there and got hitched later. Instead, Facebook has turned into that loud, obnoxious girl that spills her drinks on people and trips you when you’re trying to make your move on the cute girl with the Jimi Hendrix obsession. We just want you to throw an awesome party and stay out of the way, Facebook.

In today’s web, brand dilution is a huge challenge to deal with when marketing your school (or ANYTHING), and Facebook just walked up and dumped a bucket of gas on the fire (no more metaphors or similes, I swear! Especially because a bucket of water is probably a more fitting comparison in this instance…). AllFacebook takes a good look at brand impacts from this as well, using an excellent example with Coca-Cola. I’m waiting to see how they answer this issue, but my worry is that some of the damage is done. My initial thought is just how much actual, human interaction it will take to clean up this mess, and I just don’t think they have it, and in this case I don’t really think you can just rely on the “community” while claiming “hey, that’s how Web 2.0 works, baby.”

I wish I could say there was a silver lining. I wish I had a bulletproof suggestion for how to make sure your brand management isn’t tossed to the wind. I don’t. Community pages are designed to be “dedicated to a topic or experience that is owned collectively by the community connected to it,” which is fine for pages about Pogs and brewing your own beer. It’s trouble for companies though. I doubt this story is anywhere near over.