For all of the web shops out there that are already set up with eight different people devoted to the content strategy process for your university - see you later. You probably don’t need to worry about today’s post. For the rest of you (by which, I think we’re still talking about nearly everyone), well, here’s a look at roles, responsibilities, and maybe some ammunition when it comes time to staff up. Earlier this month Richard Ingram posted this infographic on content strategy roles and how they relate, and it was one of those things that so perfectly sums up an enormously complex concept that it immediately requires further analysis (thereby making it more complex again, but whatever, hehe). 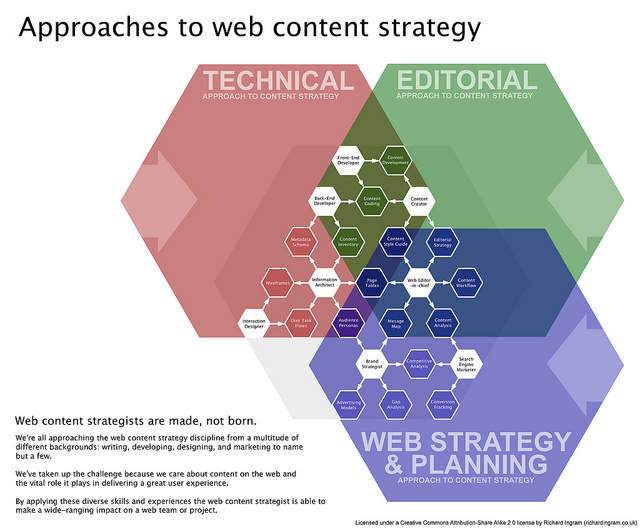 First, be sure to go check out the link above and give Richard’s infographic a really good look. What makes this so important is that it does such a nice job defining the different roles in content strategy, how they relate, and how their responsibilities tie together. By articulating this complex relationship in a way that makes it easy to visualize and digest, it becomes easier to craft job descriptions and positions based on what you have.  If you have one particular position, but not another, you can get an idea of how to spread out the responsibilities that are left over. In higher ed, this is important, because we often struggle to define the limits of our jobs and how to best configure our offices for success. And I should mention that you need to keep in mind that this is outline roles as it relates specifically to content strategy, and it doesn’t necessarily hit on some of the other important needs of web development outside of content.

For example, using the chart as the template, if you discover that all of your tooling falls into the technical side, you can begin to easily understand why you likely have needs in the editorial and strategy/planning sectors that aren’t being met. You can also see that if you spend time focusing resources in technical and strategic areas, it is possible to spread out responsibilities to cover the editorial. In fact, of the eight core roles, you could lose half of them (Front End Developer, Back End Developer, Interaction Designer, and Search Engine Marketer), and still conceivably manage all of the responsibilities save for one (conversion tracking under search engine marketing). These relationships are important, because it shows how groups of people can be organized to help each other do a job. Even though a Web Editor-in-Chief and a Content Creator could equally work on a content style guide, together than can be more than the sum of their parts due to the complementary nature of the roles. Instinctively we know a lot of that, but it’s nice to see that converted to a black and white concept we can show others.

Of course, in a lot of cases, many of us don’t even have four folks to leverage, and if we do, they might not be set up like this example (for instance, you may have database or system admins, programmers, etc that don’t play directly into content strategy itself, but are key components to keeping your site going). But, that’s the value. Looking at this, when you start double (or triple) covering roles with one individual, you can make assumptions about who fits best where. For example, if you don’t have a Web Editor-in-Chief, it makes more sense for the Content Creator to cover that role and its responsibilities than a Back End Developer. The Content Creator could also split those jobs with a Brand Strategist. On the other side, if you want to develop yourself or an individual in one particular direction, you can make sense out of the skill progression that would, for example, take you from wireframing to content coding. Think of it like a skill tree in a role-playing game. You level up by connecting adjoining skills together.

The other thing to take from this explanation is a sense of organization. In your job, if you find that you are doing content workflows, wireframes, and content development, and others working with you are similarly spread out, then you are going to be losing efficiency through a lack of focus. Rather than being great over a unified area, you’re just good at some random unrelated things. Use this as a guide to group responsibilities to the parties where it makes sense. This is exactly why it is so hard to develop and execute content strategy in shops where it is a one man army. In that case, you’re simply all over the place. As a result, so is any strategy that you try to develop.

Here’s another way to think about it: use internal strategy to reinforce external. If you are well organized and properly tasked, and you can show how internally your processes are a clear machine, it makes it much easier to convince others that the strategy you are suggesting to them is sound. Even if you only have two or three people, by diagramming out responsibilities, overlap, and progression, it will make you much more confident and appear much better prepared. That will ultimately be reflected in the shape your content strategy takes. Beyond that, it will help you communicate some of the otherwise more ephemeral concepts to other people you rely on or answer to that don’t have the instinct or access to the concepts we deal with day in and day out. It puts into perspective ideas like “I’m a back end developer who does a lot of content coding, and here’s an idea of why I’m not real great at content analysis.”

Last but not least, craft solutions. You can’t start generating content strategy when you or your office is in turmoil to begin with. Use this concept as a guide or blueprint, tweaking as necessary to tailor it to your environment, and actually craft professional development goals around it. If you currently have two or three people in your office that just “do a bunch of stuff,” sit down with them, play to their strengths, then lay out a plan to develop them into trained, targeted individuals. A year from now, see how you’ve done developing those skills, and add more in. In the end, you’ll hopefully have more well rounded individuals that can take on jobs and tasks flexibly, and you’ll have fewer things that only one person can do.

The smaller our offices are, the more hectic our lives are, we’re all familiar with it. Introduce some order.