Comparing the Obama and McCain Emails 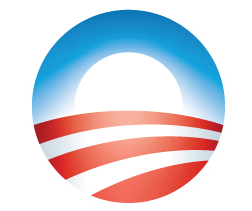 One week from today, thePresidential election will finally come to a close.  No matter who you vote for, it’s been a campaign of milestones.  As an e-marketer, the most fascinating to me has been watching all of the emails coming out from either side.  Comparing the two makes it clear why Obama has raised an unprecedented amount of money utilizing an aggressive strategy, while the McCain campaign has floundered by not really “getting” the medium.

Take a print person and give them an email tool and the first thing they want to do is an e-newsletter.  Repeat after me: E-newsletters are the lowest form of email marketing.  It’s like the chain letter of email.  No one reads them and they consistently show the lowest conversion rates.

Who in their right mind is going to site at a computer screen and read all of that?  I was having coffee with a colleague last week and she made this analogy: When you’re buying a car, the salesman gives you a brochure with lots of pictures when you’re looking for more info.  They don’t give you the owners manual.  Sending out newsletters like this….throwing all the information out there in one fail swoop….that’s giving your users the owners manual instead of the brochure.

Instead of an e-newsletter, let’s take a look at what Obama does: 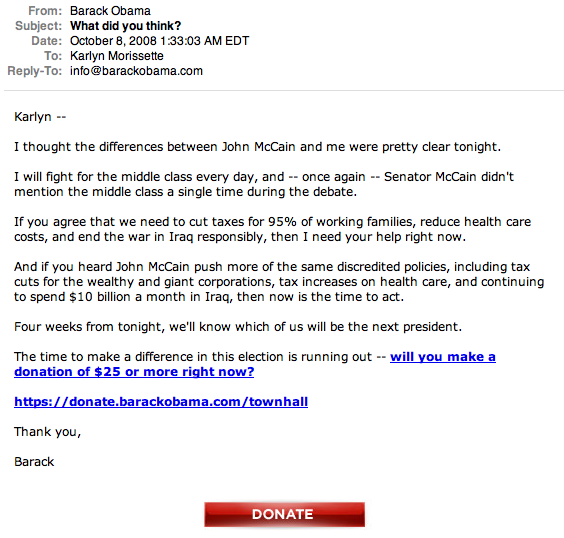 Short, sweet and to the point.  This is the most common form of email sent directly under Obama’s name.  The text is mildly stylized, but other than that there’s little HTML - nothing to distract you from the message or the call-to-action.  It’s also timely - sent out at 1:30am the morning after one of the debates. It speaks directly to what just happened when it’s fresh in the user’s mind.

To be fair, McCain doesn’t just do e-newsletters.  But the rest of his emails aren’t much better.  Let’s take a look at his email that was sent in response to the same debate as the Obama email above.  It was sent at 6:30pm, the following day: 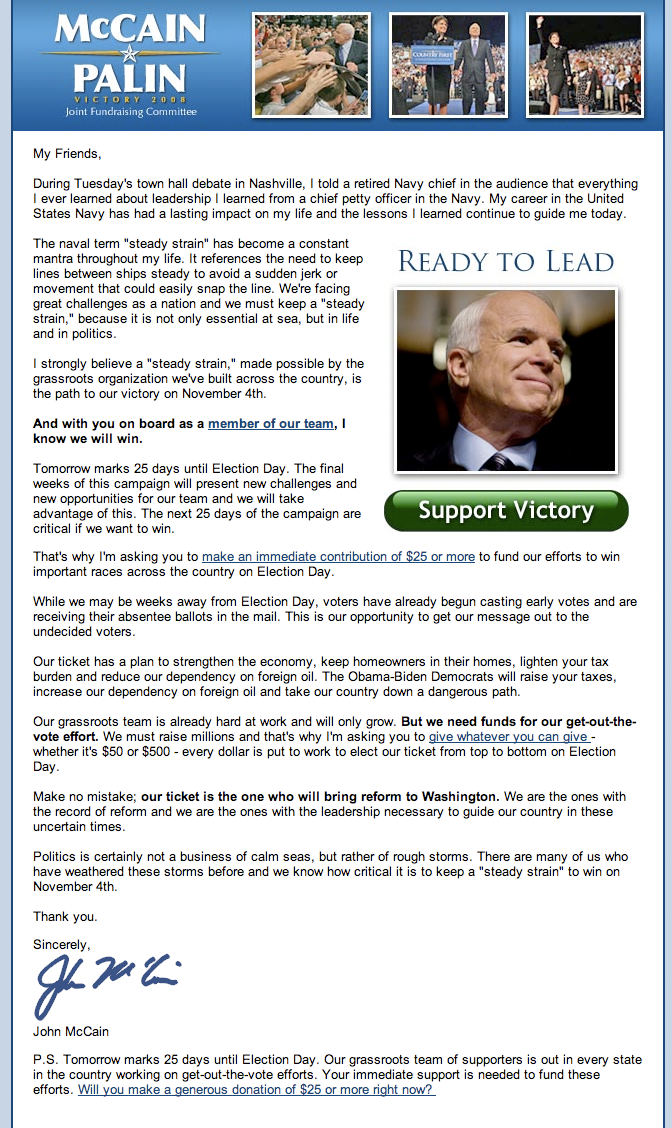 This email SCREAMS as having been designed by a print person.  I always cringe when I see fake signatures at the bottom of emails, as if its even a plausible option to have an actual person “sign” it.  Additionally, the message is unfocused.  His main call-to-action (the one in bold) seems to be to join his team, yet the rest of the calls-to-action in the message have to do with giving.  The first part of the message was clearly written after the debate while the second half of it was just boiler plate.  Contrast this directly with Obama’s, which was clearly written right after the debate in reference to what happened during the event.

Break Up The Message

If you must do a longer email like the McCain one above, find a way to handle it better than taking a print letter and slapping it in a template.  The Obama campaign found their way to handle it.  They split the copy of the email up into segments with he does send a longer message, so the first part could really be an email unto itself.  If you want to read more, the second part is an email unto itself. And so on and so forth: 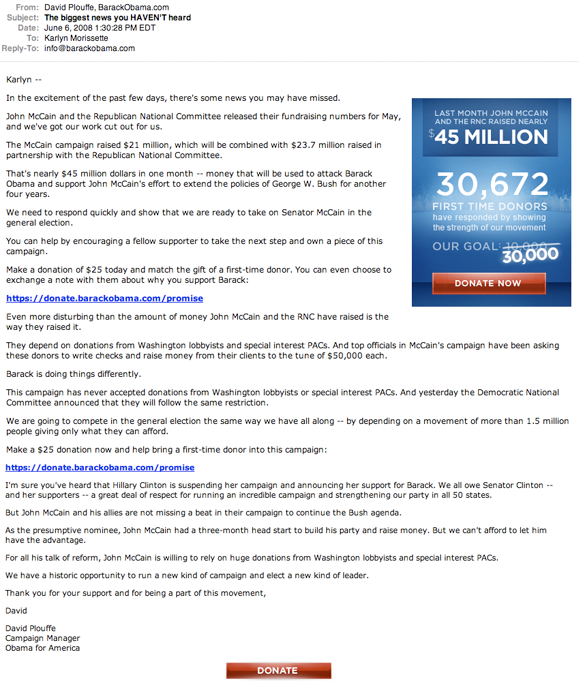 The message is cohesive and the call-to-action is consistently throughout.  It’s also reflective of another interesting tactic in Obama’s campaign - lowball a goal for new donors and then raise it to create excitement.  They used it throughout the primary and general elections and its no doubt been one of the keys to their fundraising success.

The Obama campaign sends out emails almost every day from one signer or another.  That’s OK, because they’re also giving me value.  Consider this message, where David Plouffe, Obama’s campaign manager, sends out a recorded video discussing the latest developments in the campaign: 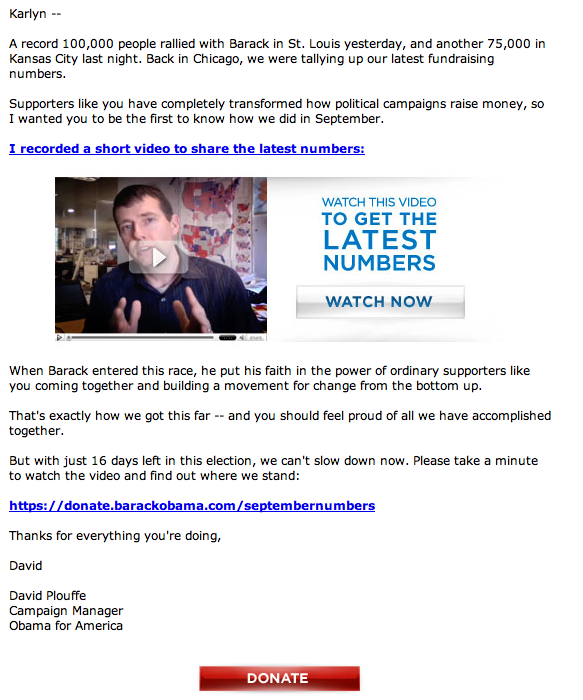 On the other hand, the McCain campaign uses almost the exact same template for every single email they send.  Their MO is always the same: take a letter that was written for print and slap it in a template, no extra value added: 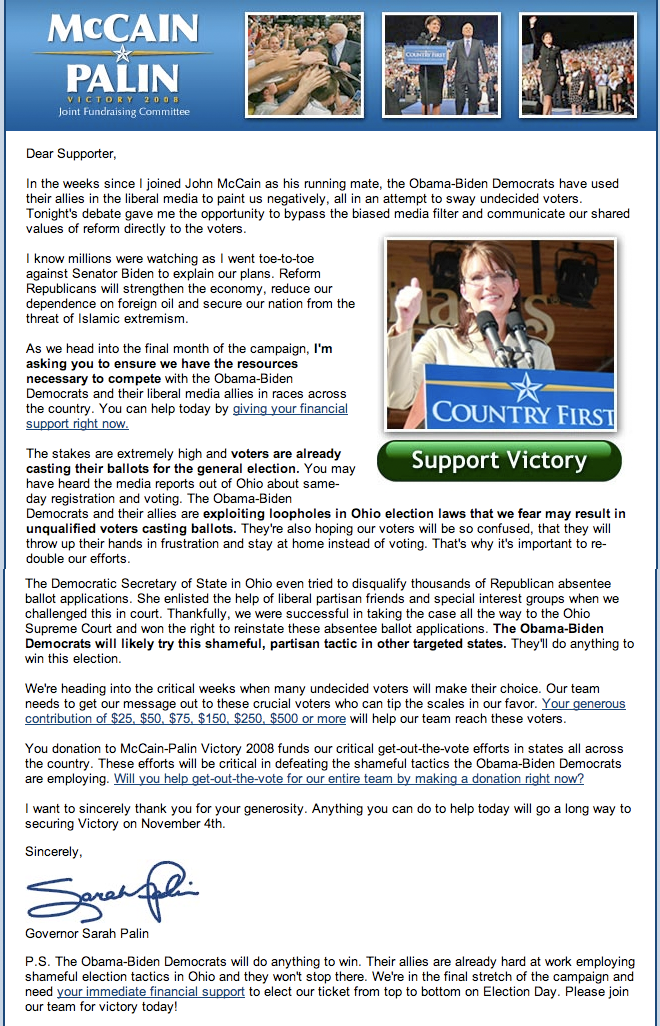 The Moral of the Story…

The McCain campaign would have done well to refer to my email commandments.  Successful email is all about timely messages, short, relevant copy and overt, consistent calls to action.  It’s the epitome of a print mentality versus an email mentality.  Regardless of who you’re going to vote for, take an objective look at these messages and think about which ones you would respond to.  The choice is pretty obvious.

14 Responses to “Comparing the Obama and McCain Emails”