Happy Easter: A New Blogger Has Risen, My Father

I hope that everyone had a great Easter weekend?  I have a little quasi Easter story that I wanted to share. 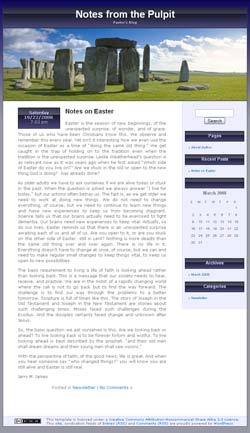 My father is a minister in the United Methodist Church and like most preachers he writes for the church’s monthly newsletter.  I get the newsletters and a few months ago it hit me…  What my dad is writing is essentially a blog.  The only real difference is that he prints it and mails it instead of posting it online.  I sent him an email and told him that we needed to setup a blog for him so that he could talk to his audience online!  He’s already producing the content and even if it’s only once a month it’s essentially a blog.  This is by no means a revolutionary idea as I’ve seen many ministers that blog, but it was kind of excited to think that I could bring my sixty year old father into the 21st century and into the blogosphere!

Last month his post was about his webmaster son, that would be me, telling him that he was a blogger who just didn’t know it.  In his writing he describes how at first he dismissed the idea, but after thinking about it more thought it might be an interesting idea.

So while I was visiting my parents this weekend we setup my father’s blog.  We did our best to buy his name online and I set him up a Wordpress blog on my hosting plan.  Yes we could have really easily setup a blogger or wordpress.com blog, but that’s just too simple for the webmaster son.  After a few hours yesterday jmjames.com was created.  There is only one post up now, and I’m sure this blog will be slow in building, but the exciting news is that my dad is a blogger!  I titled it “Notes from the Pulpit” because I just didn’t think Pastor’s Blog was catchy enough.

I still have some more behind the scene setting up to do for him like feedburner, google analytics, and permalinks, but he’s off to the races.  I’m not suggesting that everyone should try and turn their parents into bloggers, but I think there are many individuals who could easily write a blog about their area of expertise who just need the suggestion to get them going.  So who do you know that should be blogging?  Your challenge is to offer them a little nudge and help to get them going!

2 Responses to “Happy Easter: A New Blogger Has Risen, My Father”