Evolving in a Recession: Opportunity in Open Source

Raise your hand if you see your budget on the chopping block for next year.  The current topic de jour has been how so many school’s are being asked to do more with less.  Budget crises from state to state have everyone scrambling to find ways to cut corners, and trim fat.  Some people are lucky enough to be well past a recent redesign, and have frameworks and tools in place for the future.  In those cases, be glad you got on the boat early.  But, that doesn’t mean that there aren’t still a lot of schools needing to evolve, or looking to retool.  One thing that is seeing renewed interest, are the potentials of open source software to help drive web sites.  For nearly any tool you use: CMS, calendar, E-learning, project management - there is some kind of open source alternative.

Admittedly, just because an open source alternative to commercial software exists, doesn’t mean it is good.  But, let’s look at a content management system, for example.  If you’ve ever had the chance to talk content management systems with me, you know I am a big proponent of dotCMS.  Why? Because it’s free, awesome, and crazy easy to use.  I have three words for you: Enterprise Open Source.  You might have heard about similar offerings from the likes of Drupal, who recently began offering a line of professional support for their open source CMS.  This is also basically what you pay for with things like Red Hat Linux.  The idea is that the software is free to use as you please, but if you need a backbone of support, you can pay for that, too.  Why this works so well for the likes of us is that it allows us to offer professional tools for a small (or no) line item on the budget.

Why is this important?  Simply put, have you priced things like RedDot or OmniUpdate lately?  Not to say they aren’t great systems, they are, but a lot of schools could see themselves coming into a demand to update their sites’ infrastructures without much in the way of financial support to cover such a change.  And while the temptation might be there for some to try and shoehorn a large and complex site into something like Joomla, it’s a good idea to know that there are better alternatives out there.  And CMS’s aside, if you are looking at applications for other areas of campus like community development, portals, CRM, etc, those costs can really add up fast.  Slap on top of that annual support costs and all you’ve really succeeded in doing is creating a great big money pit. 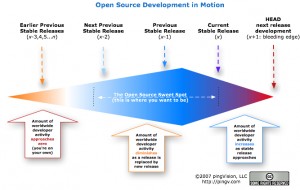 What dotCMS offers universities is a broad scoped tool, with granular permission controls, varied template designs, flexible content creation and repurposing, and an open source code base to build upon.  More importantly, being open source, there is a growing and very valuable opportunity for schools who have adopted it to begin networking.  These schools have the chance to pool resources towards goals.  Maybe that means taking several small amounts of money to do a “group-buy” on a desired feature (dotMarketing will custom code about anything you want and commit it to the code base, but if it’s off the normal roadmap, or a low priority, money obviously changes said positioning), or if the schools have committed Java developers, they could work on creating Viewtools and servlets that could then be shared between everyone.  It’s this spirit of communication, collaboration, and extension that makes a tool like this substantially more valuable than some closed source counterparts.

Enterprise support entirely aside, I am trying to encourage schools who have already adopted dotCMS to consider such a partnership.  There’s a group on the UWebD Ning site, and we’ve set up some basic help forums for the software.  My hope is that through collaboration, we can do a lot to help ourselves.  Users have a valuable opportunity to embrace and extend in ways that simply are not allowed or possible with commercial enterprise systems.  Imagine the driving force a network of committed schools can apply to open source projects that we see value in.  Not only can we make them better and grow them quickly, but we can expose people to the products.  Why do you think Apple loves getting contracts with schools?  When you get your product in front of people for hands on usage, when the time comes for them to make their own choice on what to use, what do you think they’ll choose?

Some schools have created similar approaches to CMS development with things like Zope/Plone, and there’s no reason we can’t do the same in other arenas.  We are in the market of knowledge, and it only makes sense that universities should be the breeding grounds for supporting open source initiatives.  That’s the very spirit that drives us, and it’s the way we can really begin to carve out a valuable niche for ourselves going into the future.

Better still, consider how you can take and apply this kind of mentality to other tools.  Maybe you use SugarCRM, or Collabtive project management,  or Moodle E-learning software.  Any of these tools could give you the chance to build with others.  As an office, our two man staff can’t cover a lot of ground, but if we can combine our efforts with other schools, suddenly we have some horsepower to apply to needs.  Now, that doesn’t me coordinating such efforts is either easy or fun, but once established, they can become invaluable lines of communication and development.  Ultimately, universities are well-oiled machines when it comes to spending money, and we’ve spent a lot of years thinking that any problem worth solving is worth paying someone to solve, but that’s just not a model that appears to stay solvent as we move into the future.  Open source software gives us the chance to not only do more with less, but to simply make ourselves as individuals and employees, more valuable.

Look at it this way: anyone can form a committee and hire a company to do a job, but if you are specifically skilled at developing products, and have a resume full of OSS building experience, and you can show how that translates into saved monies, you’ll be pretty darn secure into retirement.

10 Responses to “Evolving in a Recession: Opportunity in Open Source”