How Safe Is Your Job? 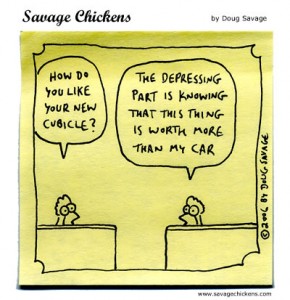 There was a point, about three years ago, where I was seriously wondering what job security in a jack-of-all-trades style web job was really like.  Was there value in it?  Was there a future in it?  These kinds of questions are inevitable when you consider where you are, where you can go, and what you can do between here and there.  The web is a big place, and those darn kids that won’t get off our lawn are sharper about web stuff than they used to be.  Are we destined to become a dime a dozen, especially at universities where we are effectively training people to replace us every day?

I think it’s always important to weigh your career once in a while, and determine what the longevity of it is, both as a job, and as a means to keep yourself satisfied.  That was where a lot of these questions originally came from for me.  I was trying to determine how to further develop myself professionally, and in what ways to do it.  The first thing I think I was able to really work out was that yes, we should keep ourselves sharp (a given), and that yes, the web is a great industry to be in.

I, for one, don’t view the younger generations as a threat just because they are young and have been exposed to the internet from birth.  Had the web stood still, and never evolved beyond basic HTML, I think it would be a totally different story.  Luckily, the web is crazy dynamic, and evolving in ways that can blow even the most hardened veteran’s mind if they think about it too hard.

Compare it to a Model T.  If automobiles were all still as simple as Model Ts, we’d all be mechanics by now, and we’d never need shops.  That’s how the web in a bubble would be.  But as cars have evolved and become more complex, so too does the web.  We will forever need mechanics the same as we will always need “web developers” (whatever that really means).  And at universities, we’re always short on skilled people and resources.  It might be easy to find a talented youngster to fill a spot, but it’s much harder to keep them when someone else can wave almost twice the money under their nose.

The other side of this point, being a jack-of-all-trades, is equally valuable.  As I mentioned, many of us work in shops where our staffing is painfully low.  It pays then to be good at everything and great at nothing.  I’m not saying that you shouldn’t strive to be experts in things, it’s just hard to do, and as a human, I require sleep once in a while.  If you network well and know your resources, even the hardest questions can be quickly answered (thank you Google).  Then as you grow in your position, you become better primed for project management and leadership positions.  The captain of a ship might not be able to fix the engine of his boat, but a good captain would at least be able to talk to the mechanics on their level and know what he can and can’t ask for.  An expert programmer might be able to hammer out Ruby or Java code like nobody’s business, but by specializing in that, they sacrifice other skills.

Ultimately, if you’re happy in what you are doing, and your boss is happy with you, then it’s all good.  But I think we all need a little to look forward to from time to time.  Where do you think the most valuable skills lie in university web positions?  Project management? Development?  Design?  Information Architecture?  Where are you putting your chips at?  And by investing in those skills, do you think doors can continue to open for you on your current ladder, or have you already hit the ceiling?