The Future is Here: Internet TV and Wireless Radio have Arrived

Don’t believe me that Internet TV has crossed the threshold to be a viable option? Check out this video that I put together showing the new MLB.TV Mosaic application.

I realize that being able to watch videos and shows online is nothing new, but the quality of the video and sound is quickly getting to the point of not just acceptable, but truly excellent. Many online video services have already begun offering High Definition content, yes even YouTube, and it is quickly becoming the standard not the exception.

With products like Apple TV and Xbox 360 getting this media on a large screen has never been easier. Also with a little creativity and some tech knowledge there are plenty of other options. The picture below is of my 42″ Plasma that I’ve connected to my Laptop using a $100 product I bought at Radio ShackGigaware PC to TV Converter. Just as easy and now I can watch MLB.TVYouTubeJoost, or anything else on my TV that is streamed right through the Internet. I’ll admit that I’m spoiled and the adapter doesn’t provide full HD quality, but it is better than normal TV. 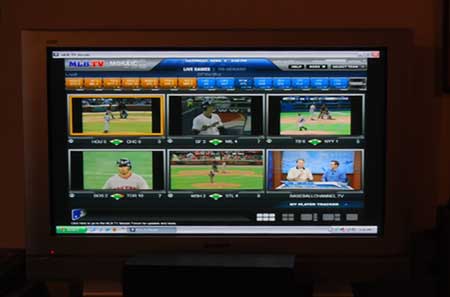 How About Internet Radio

It seems like forever, but it was less than three months ago that Last.fm announced a major free music initiative. This initiative is one of the first big steps to taking the power of music online and mainstream. As I wrote a predicted a few months ago2008 Is the Year of the Mobile Phone, the mobile phone continues to become a larger and more relevant piece of our lives. As more high speed data is being able to be received and processed by these little machines we also look to see a revolution in radio. iPods have sold well over a hundred million and continue to be a vital and coveted product for teenagers, but even these items continue to evolve.

It’s hard to dispute that the iPhone was the most talked about product ofand even Time Magazine named it the Invention of the Year. This little gadget combines the iPod with a phone and a web browser all into one really neat tool. It is possible to use this product to listen to music streaming from a website, but it’s not to far fetched anymore to imagine the next evolution of the iPod. , and as plans for a national high-speed wireless network quickly approach why not a phone/digitial music player that also easily handles Wireless Radio?

Wofford just started up an student lead Internet Radio station a few weeks agoWOCO Radio.  The Internet was chosen over a normal AM/FM broadcast station because the cost to enter the market is substantially less and going forward it has all of the advantages.

I asked James Dawson who is advising the students who run the station to give me a little blurb to describe it:

WOCO Radio is a presentation of the student body of Wofford College in Spartanburg, South Carolina, presenting a musical mix of alternative, blues, classical, jazz, hip-hop, electronica and classic rock. Using the latest in technology, WOCO Radio broadcast worldwide via the Internet.

I’ll got it on the back burner to write a more detailed post about WOCO radio, but I think it makes a good point to show how the barrier has been lowered and the possibilities are there.

In two years I plan to be listening to Internet radio wirelessly through a new blackberry/iPhone phone type device and blue-tooth cordless headphones.  Or why stop there when I could upload my entire mp3 collection currently in iTunes to an gDrive Internet storage account and play songs through that. What are your plans?

So nothing I really mentioned here is that far off and with a little technical appetite and budget the possibilities are already there. The real awaking moment is the though of these ideas and tools being adopted by the masses.  Technology already impacts our lives and it is through a little creativity that we can really stretch it out do some amazing things.

11 Responses to “The Future is Here: Internet TV and Wireless Radio have Arrived”