Save your sanity and use a grid

University web designers have a tough enough job as it is, juggling users needs while pleasing committees and numerous other stakeholders. Doesn’t matter if your web office has complete control or just influence, using a grid can make completely unrelated sites look uniform.

In this post I’ll focus on using a horizontal grid, vertical grids are not as popular so ill leave them up to you to explore.

So what is a grid? 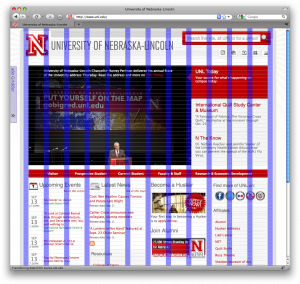 Grids exist for the single purpose of bringing uniformity to a traditionally nonuniform environment. The horizontal grid consists of a set of columns with left and right margins that create gutters. Page elements fit within these columns and gutters.

Using a standard grid allows for fast prototyping, wireframing and designing. By having a set of element widths it gives the designers constraints and the developers a global stylesheet to work from.

The above screen shot is from the University of Nebraska-Lincoln and it shows how nicely the page elements fit into the grid. You would be surprised at the number of sites that use this same grid structure.

Step 1 is to determine the site width. 960 is the standard width but you can choose anything you wish.

Step 2 is to choose how many columns you want. The most common numbers are 12 or 16.

Now the tricky part, each column has an equal left and right margin. A typical 12 column grid has 10px on each side which leaves you with a 20px gutter.

Determine your column width by taking the:

Reasons to use a grid

Downsides of using a grid

Some frameworks and resources

11 Responses to “Save your sanity and use a grid”