So it’s been a while since I’ve posted something in the Social Survey series, but after seeing this video on ProBloggerWhy I Love Twitter, last week I knew that I was ready to tackle my toughest task yet. Finding a Higher Education use for Twitter.

So there are probably some reading this who have no idea what Twitter is. As my simplest explaination I would say Twitter is Instant Messanging 2.0. Where AOL Instant Messanger and other clients are great for carrying on conversations with someone else, Twitter opens these conversations up to a wider audience. You can talk to a specific person, but with Twitter it is fair game for anyone to jump into a conversation at any time. Instead of writing a whole post about what Twitter is this Guide to Twitter: What It Is, How To Use It and Twitter Tools should cover pretty much everything you need. Or if your lazy and a visual learner Common Craft has created a video explaining Twitter in Plain English.

Some ideas have been thrown around about using Twitter for Higher Education marketing, but the reality is Twitter is a toy for internet techies to communicate. The rest of the world isn’t really using this resource yet. Jeremy Wilburn attempted to tackle Using Twitter in Higher Education a few months ago and it started some interesting conversation. I’ll admit at the time I was a twitter newb and not using it nearly as much as today. Back in those days I simply pulled the RSS feed from twitter and scanned it twice a day. Of course I also only had a fraction of the people in my twitter channel.

Jeremy suggested possibly using Twitter as a live chat channel for admission. Some of the other ideas include emergency postings through twitter and in the comments Web Managermentioning that they use it at Allegheny to aggregate their school news feeds. Me being the outside the box thinker I am wonder if Twitter couldn’t be use by a College President to share tidbits of the life of a president? I know our president is all over the world and you never know where, but wouldn’t it be interesting to see your president tweet that he’s in Aspen for a conference? Am I stretching to far here?

Seth Meranda was kind enough to create a community of higher education twitters which is an interesting resource. Check out the HigherEd Crowdstatus community. This page is most valuable if you are a higher education person just getting on Twitter and would like to connect with some really good individuals in the mix already.

Another article that I found really useful in understanding practical uses for Twitter wasHow to Use Twitter for Marketing & PR, over at HubSpot. I’d recommend reading the article for yourself, but some of the big take aways is the live updates that can be posted about events, monitoring conversations about your company, and as a way to stay in touch with Social Media heavy users.

I asked some faculty, staff, and students around campus if anyone used Twitter and for the most part the response was, “What is that?”. Even the Computer Science students aren’t really into Twitter, yet. Our library does have a Twitter account that they tested sending updates through, but it hasn’t been updated in months.

Come Back to Earth

The reality is Twitter is great for speaking your mind, but it ultimately leads to increased bacn on the internet. I have been able to ask the community some questions and received some useful responses, but so much of the conversation is little tidbits about who’s doing what (mostly what’s for dinner).

I use Twhirl to keep up with Twitter instead of updating the website. Twhirl essentially turns your Twitter conversation into an Instant Messaging application that users are probably familiar with and adds some additional functionality like URL shortening. You can also tinker with the settings to only allow Tweets to come through every five minutes or whatever you choose.

In closing I have to share this experience. Since I mentioned Jeremy earlier, one of the wildest experiences I’ve had on Twitter was last Friday as Jeremy was experiencing one of the earthquake in the Midwest on Friday and twittering his experience. 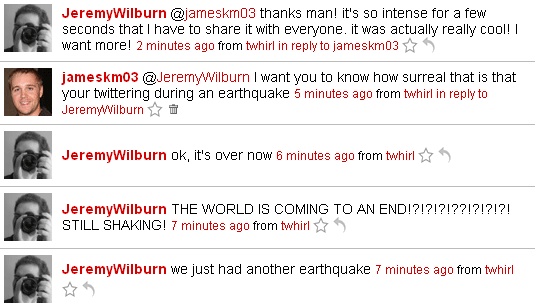 Does the experience have any practical impact on my life? No not really, but in the information age where we all thirst for knowledge and love to crunch every little morsel Twitter allows us to do this at a rapid rate never experience before. That’s the real take away value, if that interests you.