I’m an accessibility advocate and one thing thats been bothering me for a while was the lack of an easy way to caption videos uploaded to YouTube. They clearly explain they support closed captioning:

YouTube supports two formats: SubViewer (*.SUB) and SubRip (*.SRT). “To add several captions to a video, simply upload multiple files. If you want to include foreign subtitles in multiple languages, upload a separate file for each language.

There were a few tools out there but most were expensive or did not work too well. It was a major detractor for promoting accessibility.

CaptionTube allows you to caption one of your own videos or one owned by another and simply email them the caption file. I tried it out and wanted to post a review/how to add captions. Because I don’t have personal videos uploaded so I decided to do one uploaded by my institution. Its seven minutes long and has a narrator, I decided to just do the first one minute. 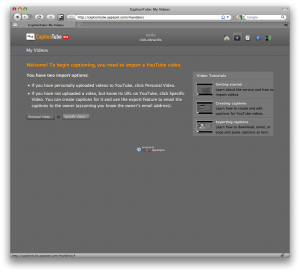 Initially presented with just two options, import one of your videos or type in a link to a video. The site is powered by Google’s App Engine, it has the feel of a Flash/AIR app. I typed in the URL of the and it loaded up.

Getting into the timeline view

The timeline view is like most video editing applications you can skip around and zoom in/out.

Skipping to the first spot the narrator starts to talk was not easy, pinpointing a specific time jumped a few milliseconds before or after. Since I didn’t have a transcript of the video I had to just type as the video was playing.

Its all about timing 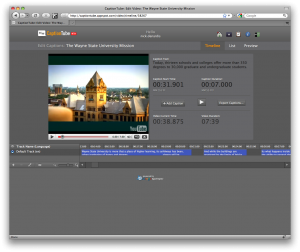 The next difficulty came in when you click the “Add Caption” button. It was not a problem to keep up typing with the video but once done the length of the caption didn’t update. It defaults to two seconds, then its up to you to put in the length of time. If it could update the length with the play/pause times it would have saved a great deal of time.

Overall to caption one minute of video (eight total sentences) took about 15 minutes. And that included the time it took to orient myself with the software. Not bad especially for the first time. 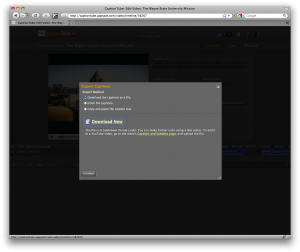 Exporting is simple as pie, when finished just click the “Export Captions” and it allows you to Download (sub file), email the file or copy/paste the actual captions with timing.

Adding the caption file is simple, upload it right from the Edit Video area. After saved they will show up immediately. .

What is nice is if you need to make changes to the captions after reviewing the video you can log back in to CaptionTube and your captions and timings will be saved. Although I did not see a place to import an existing caption file which would be nice.

CaptionTube is great and needed addition to the YouTube/Google toolbox. It’s about time captioning went mainstream. Overall the site is very easy to use, just needs a few tweaks for someone typing in real time to make it more useful. I also wish YouTube allowed the CC file to be viewed as text on the front end, not just an overlay on the flash video. Not only would that increase SEO for video content but also give someone a full overview of the video’s content.

I’m not sure if it was just added this week but I have watched all the previous Weekly Presidential Addresses and this week was the first time I noticed closed captioning was enabled on all his video’s.

I encourage everyone to start captioning video’s, especially if they are associated with your institution. It not only shows you care but it also gives any who has trouble hearing or don’t have speakers the ability to still enjoy your content.