At the end of February, .eduGuru set out to begin another round of research on a trend in higher ed web development. This time, we took a look at the CMSs being used from school to school. Which CMS to use for a university is a question that lingers in forums and on mailing lists frequently, and it’s our hope that you will find the following information helpful in deciding which system will be best for you. Additionally, we’ll be following up with a series of guest articles over the next couple months that will discuss their experience using the top CMSs from this list for their school’s web site. This post will be fairly long in order to review all the data. If you want, you can now and review it on your own (this data has been edited to provide anonymity to the contributors. Additionally, this research is released under a by-sa Creative Commons 3.0 License. It is provided as a zip file with .xls, .pdf, .csv, and .ods formats for your convenience).

There were 144 responses over the first two weeks of March. There are 4146(ish) colleges and universities in the US, however there currently is no metric for how many of those are already using a CMS. Consider the results specific to the US, as even though there were a couple international entries, it was not statistically significant. See the chart below for a break down on campus size.

“This is one of the more political and important decisions a university makes. Every system has its benefits and drawbacks, but it is almost impossible to compare systems. This is especially true since you really don’t know the system until you’ve been using it for years, and at that point it is too late to switch or be able to evaluate other products.”
~ Survey comment

The golden question: Which CMS should I use? Well, as you can expect, that’s not a simple thing to answer. As you can see in the chart below, the top four (excluding in house solutions), is spread pretty evenly. OmniUpdate comes out at the top of the list, which isn’t surprising given the length of time they’ve been around, and the fact that they have produced a higher ed targeted, feature rich CMS. The other three - dotCMS, Cascade, and Drupal - run neck and neck, which is interesting, since these three systems are all quite different. But, that does emphasize the point that different schools will have different needs, and will choose a CMS to fit those needs. Always take the time to properly identify what needs and requirements you have before selecting a CMS.

PHP and Java rule the roost as programming language, with PHP just barely leading. Together, they make up more than half of what is being used in higher ed. This is good news for those looking to staff up on programmers, since these two languages are also generally in the top four most popular programming languages in general (along with C and C++), meaning applicant pools should be bigger for them. I realized I made a mistake and left Ruby on Rails off the survey, but it turns out that it has definitely not hit the radar, and was written in by only one school. Note: some survey entries were modified for uniformity and to correct incorrect platform language identification.

Schools were fairly evenly split in whether or not they had more than one CMS available on campus. Larger schools, with good reason, were more likely to offer multiple CMSs as opposed to small schools. WordPress was one of the most popular secondary CMSs, probably as it sees significant use as a blogging platform, rather than primary site CMS. In fact, the secondary CMS reports showed additional penetration by other open source CMSs as well, like Joomla and Drupal. These systems will generally prove easier to deploy in a supplementary capacity since they usually have shallower learning curves and quicker turnaround times.

By and large, schools host their own CMS. I believe this is perfectly reasonable, since we normally have access to heavy iron more than capable of hosting a web server, and we’re connected to pipes with equally available bandwidth. The largest exception was OmniUpdate, which was mainly hosted by the vendor. They made up 75% of the responses that said they were hosted by their vendor. Of OmniUpdate users specifically, only one-third host it themselves. It should be noted, however, that this is intentional on their part.

Over half the schools (53%, 58% when unknowns are excluded) host only 5,000 or fewer pages. There was significant dropoff after 100,000 pages. This data roughly mirrors the demographics of survey respondents - 65% were from schools of 10,000 students or less. Small schools are more likely to have fewer pages, 75% have 10,000 pages or fewer versus 51% of large schools. 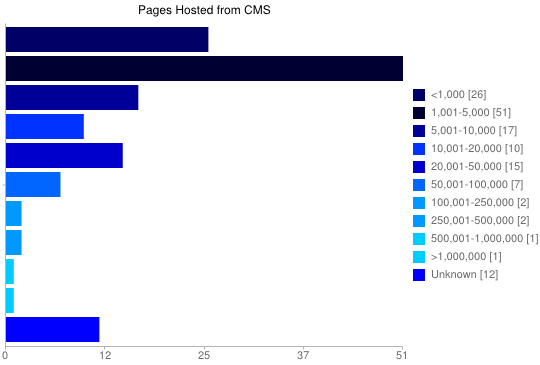 High traffic sites might be concerned about the number of pages they can serve without taxing their hosting resources. Surprisingly, if you serve over one million pageviews in a month, you are in the minority of universities. Note that some systems, such as Cascade, do push publishing to a second server, or others might have something like a Squid proxy running, so the CMS itself isn’t necessarily responsible for serving pages to a visitor. These statistics do not take that difference into account. Also of note, nobody serving over one million pages a month reported using WordPress or Drupal (correction: three different respondents reported using Drupal in cases over 1,000,000 pageviews).

One quarter of respondents don’t make usage of their CMS mandatory. About half (47%) do, with another 28% having flexible rules. It would seem the trend definitely is towards trying to get people to use a central system. A slightly higher percentage, 35%, of larger schools don’t make CMS usage mandatory. Otherwise, statistics between large and small schools are relatively similar.

An interesting result, there appears to be relative consistency in the number of contributors schools have at each level, with a peak between 101 and 250 users. Only seven systems were being reportedly used with more than 500 users (each with only one vote): Contribute, Luminis, Plone, OpenText, Cascade, Ironpoint, and Drupal. The average satisfaction with a CMS appears to drop over 500 users as well, dropping by half a point among those users.

“Choosing and implementing a CMS can be done within a small organization like ours. However, getting the culture to change to accept distributed ownership of web content is much tougher!”
~ Survey comment 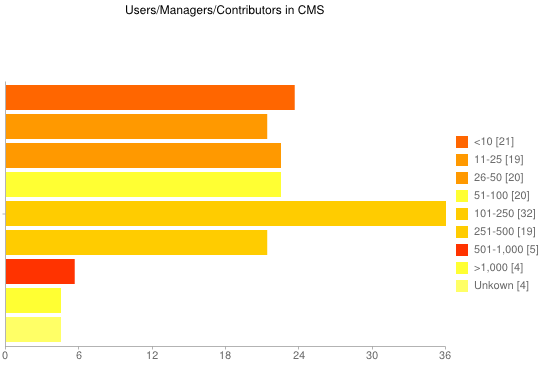 Regardless of the reason why, almost three quarters of users surveyed said they’d use the same system again, whether because they just liked it, or because it would be better than risking a switch to a worse system. The rest would either switch because they want a better system, or because options now are better then when they first deployed their current CMS. This metric didn’t take into account those who might be on the fence as to what they would do. Large schools were more likely than both small schools and the average to reuse the same system. Users of Contribute and custom/homegrown CMSs were most likely to want to change (71% and 62% respectively). That doesn’t include Serena Collage users, all of whom would change for obvious reasons (the product is no longer being supported).

“The real answer to the question about whether we would choose the same platform again from us would be: We’d do another analysis before concluding anything. Since we haven’t done that in ~4 years, for now we’d stick with what we have, but if we were really considering things again, we’d spend several months on a market analysis before concluding anything.”
~ Survey comment

Overall satisfaction was rated on a scale of 1 to 10. No conditions were set on how to rate the satisfaction, so this is very qualitative. The average score was 7.04. Contribute failed miserably out of all the CMSs (based on a minimum of five schools reporting usage). OmniUpdate took the crown, doing better than a 9 overall. Reason, a PHP based open source CMS developed out of Carleton College, came in second at 8.6, and dotCMS took third at 8.08. Schools using custom or homegrown solutions were more than a point under average, falling below a 6. Smaller schools were more likely to give higher marks to their CMS, though the total average score swing between large and small schools was only about a quarter point.

* Based on reported satisfaction, minimum 5 ratings

* Based on reported satisfaction, minimum 5 ratings
^ dotCMS does offer a paid enterprise branch

* Based on number of surveyed schools using them, excluding custom and homegrown CMSs

If you , you can read all the comments, pros, and cons people listed with each system. For the sake of brevity, I only included a couple here. This article will be followed up in the coming weeks by several guest posts discussing all the top used CMSs to give you a look inside other people’s experiences. In those posts, we’ll include some of the specific pros and cons that survey respondents submitted. Direct your thoughts and questions in the comments below, and we can continue discussing any of the metrics you’d like to.

[Results] Higher Ed CMS Usage by Director of Web Marketing is licensed under a Creative Commons Attribution-Share Alike 3.0 United States License.
Based on a work at doteduguru.