Why Your Social Media Strategy May Be Falling Behind

While social media is a powerful tool, many colleges and universities aren’t seeing the results they’d like from their online efforts. To discover why some schools enjoy great success while others seem to be stuck in a rut, I spent the last few months talking to schools like UCLA, Oregon State and Emerson College that are doing amazing things with social media.

Through my research, I discovered several key differences between schools that are leading the pack and everyone else. While I present my findings in detail in my white paper, here are three things that social media leaders do best:

Whether you belong to a state university or a small Catholic college, your school has a unique personality. While traditional marketing does a poor job of authentically sharing that personality, social media allows you to share the unfiltered voices of real people at your school.

People would much rather connect with you on a personal level than with your institution. For example, ESPN is a mammoth brand, with TV networks, websites, restaurants and magazines. Bill Simmons is a columnist on ESPN known as the Sports Guy who writes a column roughly once a week and hosts a podcast that routinely features conversations with his friends. Who has more followers on Twitter? The answer is the Sports Guy by nearly 400,000 people. On Twitter, Simmons doesn’t break news or stir controversy; he simply offers a unique perspective and personality.

Even if you just take the small step of changing your profile picture from a logo to picture of the person handling the account, you’ll empower that person to share his or her personality and give a face to your logo. “Social media should have a real live personality behind it, and it should be someone that people would want to hang out with,” .eduGuru staff writer Karlyn Morissette told me. “That’s something a lot of schools are afraid of, but it’s what people gravitate to online.”

On Facebook, we have “friends.” On Twitter, there are “followers.” LinkedIn is all about “connections.” What social media does best is create relationships on a personal level. It makes sense, then, that one of the most useful applications of social media in higher education has been creating personal connections among prospective students, enrolled students, parents, alumni and faculty.

One of the best examples of the valuable connections created by social media is Café New Paltz at the State University of New York in New Paltz. In 2009, the school created Café New Paltz, a custom Ning network for accepted students. This community featured two students, known as “baristas” who answered questions from prospective students and posted content designed to help the new students make the transition to college life. Accepted students could meet each other, find roommates, ask questions and share their excitement for school in the fall. Rachel Reuben, who then worked as the Director of Web Communications and Strategic Projects at SUNY New Paltz, measured the success of Café New Paltz by comparing year-over-year pre-enrollment deposits.

In a 2009 post on .eduGuru, Reuben said her office created the community to help improve the academic quality of the incoming freshman class. She said that the first year of Café New Paltz saw 37 percent of their target audience pay their pre-enrollment deposit compared to 30 percent the year before. Networks like Café New Paltz have achieved success at schools across the country because they help strengthen the ties of accepted students to the institution by strengthening their connections with each other.

As many social media practitioners in higher education have found, the best way to convince administration to buy into their program is demonstrate a positive return on investment. Unfortunately, measurable statistics like comments, followers, clicks and views rarely correlate to a real dollar value, while valuable actions like enrollments and donations rarely come directly through social media. How should you measure the effectiveness of media that is much better at conversations than conversions?

In the white paper, we look at two schools that successfully demonstrated a positive ROI, but went about it two very different ways. The first school, Seton Hall University, established the goal of increasing the enrollment of 2010’s incoming freshman class and eventually exceeded expectations with an 18 percent year-over-year enrollment gain. The social media team was able to attribute much of this growth to their new Facebook group for accepted students by using a metrics tool to examine the actions of applicants within the Facebook group. Seton Hall’s goal lent itself to the use of traditional metrics, making ROI easy to measure.

Oregon State University, on the other hand, recently conducted a campaign with goals that were much more difficult to quantify. The school built its “Powered by Orange” campaign to correct misconceptions about the school by showing what its students were capable of. Students and alumni were encouraged to share their written and video stories of how they are “Powered by Orange” through a number of social channels. Oregon State’s social team measured success by cataloging comments, stories and online participation. By presenting this anecdotal evidence to administration on a regular basis, the social team was granted a larger marketing budget and the campaign has become part of the culture of Oregon State.

How’s your school doing? Are you using social media to blare your message, or are you taking the time to create personal connections that pay off with real results. For more information, case studies and stories from schools around the country, feel free to download “Why Your School’s Social Media Strategy Is Falling Behind: Lessons from the Sports Guy, an Online Café and the Color Orange,” the free white paper from Fathom Online Marketing.

Dustin Brady is a copywriter at Fathom Online Marketing, an Inc. 5000 Internet marketing company that delivers everything from organic SEO to video production. He’s written articles, emails, Web pages and video scripts for schools across the country. Learn more about Dustin’s white paper series on social media in higher education through the Fathom blog. 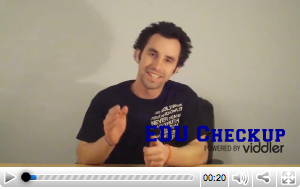