Why Less is More in College Admissions

Less is more. The idea that an admissions office shouldn’t try to appeal to ALL prospective students but rather focus on the RIGHT students - the ones that are the best fit for the institution - seems like a simple idea. Unfortunately, too many admissions offices out there still play the numbers game.

The biggest marketer of them has even hit on this topic directly. In Seth Godin’s post “The coming melt-down in higher education (as seen by a marketer)“, he states the following:

Why do colleges send millions (!) of undifferentiated pieces of junk mail to high school students now? We will waive the admission fee! We have a one page application! Apply! This is some of the most amateur and bland direct mail I’ve ever seen. Why do it?

Biggest reason: So the schools can reject more applicants. The more applicants they reject, the higher they rank in US News and other rankings. And thus the rush to game the rankings continues, which is a sign that the marketers in question (the colleges) are getting desperate for more than their fair share.

Seth is only partially right. Yes, colleges want to be able to reject more applicants to rank higher in US News. But beyond that, many schools are in this mentality that if they can get as many students as possible at the top of the funnel, that will result in more enrolls…and more tuition money.

But it’s just not true.

Don’t take my word for it. Let’s look at some numbers. Here are examples of two similar niche schools who’s marketing practices I am familiar with (you’ll have to take my word for it - I’m not naming names here). I’m not revealing any secrets - this data was taken directly off of US News and World Report’s website and is publicly available. Yes, this is what I do in my spare time. No, seriously.

School A has a very strategic marketing program designed to (a) break into new markets and (b) target the right students, a long-term strategy that took several years to build. School B uses the tactics that Seth describes in his post. What do these numbers tell you? 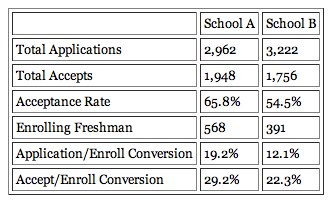 Yes, School A brought in less applications and had a higher acceptance rate. If you just looked at that, you’d think that School B was obviously more successful…but it just doesn’t pan out that way after May 1 does it? School A has significantly higher conversion rates, resulting 30% more students in their freshman class!

You read that right. Less numbers equaled a 30% larger freshman class. Why? Because they marketed to the right students in the right way with the right message. That’s how you get conversions.

So we’ve established that targeting is good. Still not convinced that less is more? I’ll give you two more reasons why you want less numbers: Money and resources. How much do you spent on printing and mailing costs each year? On data processing for inquiries and applications? On counselor time on the phone making calls to inquiries, or reading and processing applications? When you have less inquiries and less applications, all of your costs go down. You will be able to operate more efficiently as an office, and dedicate your money and resources to the things that really make an impact.

If money is no object to you, then the more is more strategy is for you. No question. But I don’t know a lot of admissions offices that have extra money lying around this year. Do you?  Isn’t it time to start being strategic so you can operate more efficiently?

OK, so hopefully by now I’ve convinced you. But how do you start?

Minimally, let’s commit to getting rid of these insane applications. Waiving the application fee is one thing - that’s a fairly standard practice - but these no essay, quick decision, free gift applications only serve to devalue the colleges they come from. You WANT applying to your school to be hard - it’s those friendly obstacles (like filling out more than 20 questions on an application or writing an essay) that helps you weed out the students who are really interested from those who aren’t.

But if you go this route, take this small piece of advise - don’t panic. This plan sounds great in September, but come January here’s what’s going to happen: You WILL see less applications. Guaranteed. At some point, you’re going to see your numbers are lower than the previous year (or your boss will) and completely freak out. When this happens, take a step back and remind yourself that this is a longer term strategy that will pay off…but you have to sacrifice your short term, instant gratification fix.

It might take a year or two (or several, in the case of School A) for this strategy to pan out, particularly if you’ve been in the mode of just generating numbers for years. You need to clean your database of all the non-interested students that are in there for the sake of appearance. It’s not a quick fix, magic bullet strategy. But look past your next enrolling class and see the big picture. In the long run, it’s the more strategic, marketing savvy thing to do.

Epilogue: I actually wrote this post back at the beginning of May 2010, one week after Seth Godin originally posted his thoughts on the subject, but didn’t publish it for a lot of reasons. But I looked at it again last week and just didn’t see a reason to bottle it up any longer.

I’ve always been skeptical of student search campaigns, which is basically the type of marketing described in this post. It’s not that it doesn’t work…it’s that so few schools do them really really well. They can be extremely expensive (we’re talking hundreds of thousands of dollars) and make up such a small slice of the overall admissions pie. And unfortunately, many colleges make the mistake of casting nets that are too broad or bringing creative to the table that does nothing to emphasize why the school is unique.

But last week I had a conversation with John Lawlor, Lynsey Struthers, and Kristen Kokkinen of The Lawlor Group and they revived my faith that there are higher education vendors out there that “get it” when it comes to student search. They didn’t ask me to write this (and honestly don’t know that I am!) but if you’re looking to do really customized student search campaigns that highlight the unique qualities that make up your institution, give them a look. Their approach is one that is sorely underrepresented in the higher education student search landscape and is such a breathe of fresh air. They won’t help you recruit every student out there…but they’ll help you recruit the right ones.