Markmissions: A New Bonding Between Marketing and Admissions

Internal company battles between marketing and sales are as old as modern companies.  Each have unique responsibilities, but are ultimately tied at the hip to the other’s success.  Marketing is dependent on sales to close the leads that they generate and sales is likewise dependant on marketing to generate new leads to close.  Despite this need for each other the two sides rarely seem to get along in companies.

At HubSpot the two sides were actually able to take a step back long ago and realize their need for each other.  Through this they created a uniformed concept which we call Smarketing.  Through the use of service level agreements (SLA) instead of blaming each other the two sides know exactly what they are responsible for and how they will help the other side.  We have weekly Smarketing meetings where the two departments come together and talk about challenges and wins together.  As we have learned to make this relationship possible it starts with excellent communication.  There is a great post on the HubSpot blog to learn more about our approach to solving for Smarketing.

The truth is higher education has pretty much the exact same problem with marketing and admission offices.  One of those resources that they regularly fight over is web development.  Sometimes schools have relationships between the two departments that are so broken that they each have their own web resources and do things in silos against each other.  I want to propose a concept similar to Smarketing for higher education, Markmission.

So maybe Markmissions sounds cheesy to you, but the reality is most colleges simply aren’t functioning as well as they could because of the animosity between these two vital departments.  Some colleges have a champion who bridges the gap and others all report to the same higher up which helps.  We have all heard the kick of reality that the flattening of higher education is coming.  This is a logical step in that direction that doesn’t have to be so painful.

After seeing Smarketing in effect for the last two years I can attest to its bonding power.  Being a software company we have also started building other communication channels for a Prustomer initiative.  Prustomer is Product + Customer for anyone who wasn’t sure because building a software solution that customers use and love is one of the hardest bridges to build.

What do you think of Markmissions?  Are these departments in colleges are much better aligned than I’m giving credit?  Are there other departments that need a stronger bond?

Kyle James - who has written 237 posts on .eduGuru 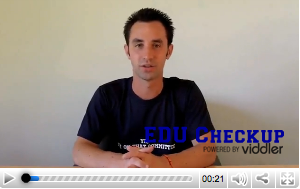